Institute for Atmospheric and Environmental Sciences, Goethe-University of Frankfurt/Main

Our research group operates a home-built instrument, the Fast Ice Nucleus CHamber, FINCH, which measures the number concentration of INP at different freezing temperatures and supersaturations (Bundke et al., 2008). The measurement principle of this instrument is unique – in FINCH the sample flow of ambient aerosol is mixed with a warm moist as well as a cold dry airflow. By changing the flow rates and/or temperatures of the individual airflows the freezing temperature and ice saturation can be varied relatively quickly (within seconds to a few minutes). Ice nucleating particles are activated, grow while flowing through the cooled chamber, and are counted in an optical particle counter (OPC). The OPC used in this instrument is able to distinguish between supercooled water droplets and ice crystals by analyzing the polarization ratio of the scattered circular polarized light (P44/P11 ratio of the scattering matrix; Hu et al., 2003). Also, the auto-fluorescence resulting from the excitation of the grown particles with UV light is detected (Bundke et al., 2010), which is an indication for biological particle material (Pöhlker et al., 2012).

During INUIT Phase 1, FINCH has developed to a powerful instrument, which is able to detect ice nucleating particles under field as well as under laboratory conditions. It has a much more stable performance than in the beginning of the INUIT project and a wealth of experimental experience was gained over the past 3 years. FINCH took part in several field and laboratory campaigns, in which unique data sets were recorded. The measurements compared reasonably well with the results from other instruments.

The general aim of this project is to provide reliable measurements of atmospheric concentrations of INP, ideally as a function of temperature (range for mixed-phase clouds: T = -10 to -38°C) and saturation ratio with respect to ice (sice = 1.1 to 1.8). These can then serve as input parameters for advanced cloud models, to assess the role of INP for cloud formation, cloud properties and formation of precipitation.

During INUIT Phase 2, the following components will be part of the proposed project:

Extensive collaborations with other research projects of INUIT (RP2, RP6, RP7, and RP8) are planned for Phase 2. 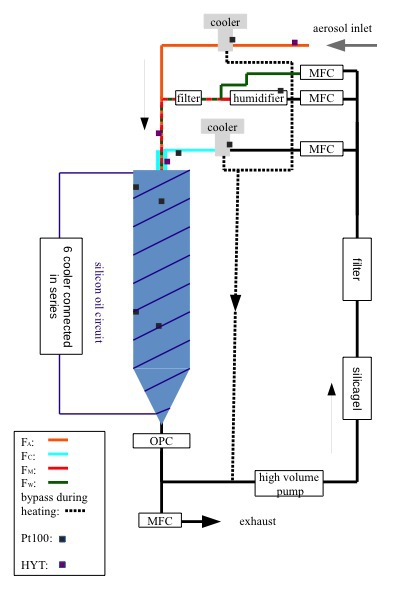