The research project RP2 aims for the chemical and micro-physical characterization of ambient ice nucleating particles (INP) and ice particle residues (IPR). The focus of the experimental approach with regard to the INP is to connect the combination of a dedicated pumped counterflow virtual impactor (PCVI) and the online single particle mass spectrometer ALABAMA to the INP counter FINCH (RP1), in order to measure the chemical composition and mixing state of ambient IN (Fig. 1). 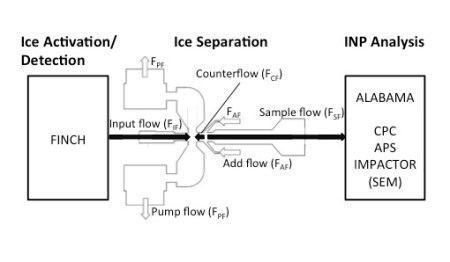 Fig. 1: Schematics of the INUIT measurement setup. FINCH activates ice nuclei and thus produces ice particles. The IN-PCVI separates these ice particles from the non-activated aerosol and smaller supercooled drops that may additionally form inside FINCH.

The setup and characterization of this dedicated PCVI, which is called IN-PCVI in the following, was one of the main tasks within the first phase of RP2. Due to the adaption to FINCH (upstream) and ALABAMA plus additional sensors (downstream), the IN-PCVI needs to be operated with different input FIF and sample flows FSF as described in literature. Thus the characterization of the cut-off-behavior was initially required. Transmission efficiencies as a function of particle size and D50% for different counter flows FCF are shown in Fig. 2. With this IN-PCVI characterization at flow settings relevant for the INUIT coupling a basis is provided for the sampling of ice particles and their simultaneous separation from super-cooled drops which may both be formed inside FINCH.

A proof of principle for the coupled system FINCH, IN-PCVI, ALABAMA plus other aerosol sensors and first results of atmospheric INP have been obtained during INUIT-JFJ 2013 field campaign at the Jungfraujoch research station. Fig. 3 (left panel) shows that FINCH and IN-PCVI INP concentration measurements agree very well. Another INP concentration for particles larger 0.55 µm is inferred from the APS size distribution measurements, which is a factor of 7 lower than the total INP concentration. Hence, it can be concluded that 85 % of the sampled INP are smaller than 0.55 µm in this case study. The right panel of Fig. 3 presents a frequency distribution of INP sizes measured by means of the APS (dashed line) at the IN-PCVI sampling line. The slope of the frequency distribution is very shallow for super-micrometer particle diameters, which is another indication that large aerosol particles are more effective INP.

Fig. 3: Left: Number concentration time series (10 min. averages) of IP (measured by the FINCH optic) and of INP which are measured by the IN-PCVI system (CPC and APS). FINCH thermodynamic conditions are plotted as solid line (temperature) and dashed line

The second combination of the CVI technique with online mass spectrometry was realized by the coupling of ALABAMA to the Ice-CVI so that the chemical composition and mixing state of IPR from atmospheric mixed-phase clouds could be inferred during the INUIT-JFJ 2013 field campaign. Respective size distributions of several mixed-phase cloud events measured using an UHSAS are presented in Fig. 4. It is obvious that the measured IPR number concentration is dominated by sub-micrometer particles with mode maxima varying in a size range from 200 to 300 nm. On the right panel the size distribution is extended to 10 µm by OPS measurements. Overall, the IPR number size distributions are very broad in comparison to background particles which indicates that larger particles are preferred to act as ice nuclei.

During INUIT-JFJ 2013, the single particle mass spectrometer ALABAMA sampled and analyzed more than 70000 mass spectra of aerosol particles and about 2000 of ice residuals when connected to the Ice-CVI. The detected particles were classified by a computer algorithm programmed at MPIC using the fuzzy-c clustering method. The results of the automated classification were further summarized by visual inspection of the clusters and resulted in seven major particle groups: pure black carbon particles (BC), black carbon mixed internally with organics (BC/OC), organic carbon (OC), lead-containing particles, industrial metals (e.g. V, Cr), minerals, and one group of mass spectra containing only single or few metallic cations as K, Fe, or Na, which can be attributed to either bio-logical particles, minerals or salts. This group was therefore termed "BioMinSal".

Fig. 5 shows the relative abundance of these particle types in out-of-cloud aerosol (left) and in ice residues sampled using the Ice-CVI under optimum sampling conditions (termed (++)) (Schmidt et al., 2015). The data show that organic particles and organic mixed with black carbon represent a high fraction of the IPR, while pure black carbon particles are not found in IPR. Furthermore, mineral dust is somewhat enhanced in the IPR but not as dominant as found in previous studies. Interestingly, large differences between individual cloud events are observed (Fig. 6). Whether the differences can be attributed to different air mass origins at different times cannot be clarified at the present stage.

Fig. 6: IPR composition for individual cloud events, reflecting the high variation from event to event. Note that the highest fraction of organic IPR occurs at higher ambient temperatures (events 3 and 4).

The averaged air temperatures during the individual events are additionally given in Figure 6. The comparison of different events with respect to the temperature conditions indicates that at higher temperatures organic particles represent a larger fraction of the IPR (event 3 and event 4). In gen-eral, the large fraction of BC/OC and OC particles found in IPR (between 27 and 80%) is an inter-esting feature that seems to support recent findings that organics in a semi-solid, amorphous state can act efficiently as INP.

Objectives for the second phase:

The characterization and differentiation of atmospheric INP and IPR, which is the main scientific objective of RP2, will be continued during the second phase of INUIT. In this context, the work program for the second phase is:

It is planned to conduct a field measurement aiming for INP characterization close the sources of possibly well suited IN particles, as mineral dust, marine aerosols, and bioparticles. This field campaign, scheduled for April 2016, will take place at Cyprus, in close collaboration with the Cyprus Institute (see Work Package Field for details). The single-particle laser ablation instrument ALABAMA will be deployed in combination with the IN counter FINCH (RP1) and the IN-PCVI: INP will be activated by FINCH, selected and sized by the IN-PCVI and analyzed for chemical composition by ALABAMA and ESEM (RP8). This setup allows a complete physico-chemical INP characterization for deposition and immersion freezing mode depending on the adjusted saturation conditions inside FINCH at a rather high abundance of potential INP.

Beside the pure INP field campaign, it is planned to have a second field activity with the objective to sample from mixed-phase clouds. This campaign will take place at research station Jungfraujoch which is the best choice as measurement site, where INP at cloud level can be examined in addition to the IPR. The IN-PCVI and FINCH (RP1) will be in turn coupled and connected to the whole air inlet of the Sphinx laboratory. Downstream the IN-PCVI, we will operate a CPC, APS and UHSAS to determine number concentration and size distribution of INP that are activated inside FINCH, along with the ALABAMA and the ESEM (RP8) to analyze the IPR for their composition.

The instruments of RP2 will also be used in the INUIT-2 laboratory campaigns that are jointly conducted at the AIDA facility (RP7) and at the LACIS facility (RP6). Single particle aerosol mass spectrometry is a versatile tool to distinguish between external and internal mixtures, a feature that is of importance for the determination of the mixing state of laboratory test particles used for ice activation experiments. Furthermore, the analysis of ice residues from the laboratory activation experiments is planned.

More information about this project: