RP 3: The importance of ice nuclei types and freezing modes for the initiation of the ice phase and precipitation - Model studies based on laboratory measurements.

During INUIT-1, this project investigated the impact of ice nucleating particles on mixed-phase convective clouds. An air parcel model with detailed cloud microphysics which provides a direct link between aerosol particles and cloud development was used for microphysical process studies. Descriptions of heterogeneous freezing processes in immersion, contact, and deposition modes were modified or newly added. These parameterizations are based on previous and new field and laboratory measurements mainly from the INUIT research group. Figure 1 shows experimental data used for the parameterization of immersion freezing.

Figure 1: Parameterization of immersion freezing: Numbers of active sites per unit mass as function of temperature for various particle types based on previous and INUIT measurements. From Diehl and Mitra, ACPD, 2015, with changes. 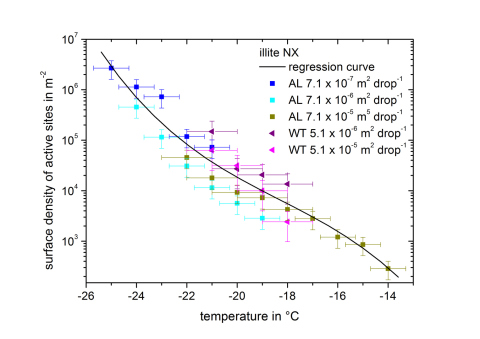 As a next step in INUIT-2, it is planned to switch to a more complex state-of-the-art model system. To understand the link between atmospheric aerosol particles, cloud properties, and precipitation, the most exact description of cloud microphysics is given by spectral microphysical schemes such as the one used during INUIT-1. During early years it was only possible to combine such schemes to simple models such as box or axisymmetric ones but for the last decade computational resources allow three-dimensional modeling. This will be performed with the 3D model COSMO-SPECS.

In the experimental part, experiments in the immersion mode are continued with two techniques, the Mainz vertical wind tunnel and the acoustic drop levitator. For contact freezing, new experimental methods will be designed at the wind tunnel to simulate realistic conditions. Single supercooled drops will be freely floated in the tunnel while potential contact ice nucleating particles are carried along with the air stream and collide with the drops as in real clouds. The collision rate will be calculated by numerically integrating the differential equation of particle motion in a viscous flow around a drop.

The objectives of INUIT Phase 2 are: