Test campaign INUIT-TO
The campaign took place in August 2012 at the Taunus-Observatory (TO), a measuring site provided by Goethe University Frankfurt. The main purpose was a first test of the newly developed coupling methods for INP measurement, which were planned to be realized within INUIT. From this test campaign important findings regarding the combination of FINCH, IN-PCVI, and ALABAMA were obtained. Besides this, other atmospheric aerosol and gas-phase data were recorded, partly by the INUIT groups but also by external partners from University Mainz (T. Hoffmann) and from the Max Planck Institute for Chemistry (J. Crowley, J. Williams).

More information on the test campaign can be found here:
http://www.mpic.de/en/research/particle-chemistry/schneider-group/projects/inuit/inuit-to.html

Field campaign INUIT-JFJ/CLACE-2013
The main field campaign of INUIT-1 was conducted at the High Alpine Research Station Jungfraujoch during January and February 2013. This field campaign was a joint activity of the INUIT group and the CLACE project, which was initiated by the Paul Scherrer Institute (PSI), Switzerland. External partners included also University of Manchester, ETH Zürich, and University of Gießen.

The results gave important new insight into the chemical and physical properties of ice particle residues (IPR) that were published in the INUIT special issue (Schenk et al., 2014; Schmidt et al., 2015; Worringen et al., 2015). Especially the high amount of organic material in the IPR and the high variability between different cloud events had not been expected.

During INUIT Phase 2, the work package field will continue the collaboration between the individual INUIT projects to further study INP and IPR under ambient conditions.

The objectives for INUIT-2 are:

Field campaigns in INUIT-2 include:

Together with WP-Model and WP-Laboratory, we will aim for INP closure by comparing predicted INP number concentration and composition with the measurements. As input data the size-resolved aerosol composition including mixing state is required. The parameterizations for IN activities obtained by WP-L in the first phase of INUIT will allow for the prediction of INP from the measured aerosol properties and the results can be compared to the results of the field data on INP. 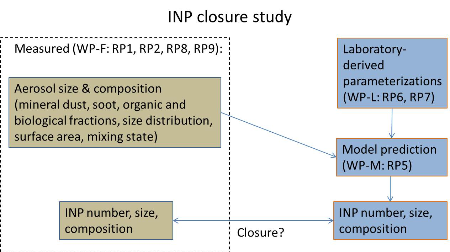 Such a field mission has to take place in an area where high concentrations of INP are present, thus ideally in Southern Europe where the influence of Sahara dust is large. Additionally, marine aerosol is of great interest for potential INP contributions. Thus, it was decided to conduct the IN closure study at Cyprus, at the field station Agia Marina Xyliatou (550 m a.s.l., 35°02'18''N, 33°03'38''E). This study will be carried out in close cooperation with the Cyprus Institute and additional external partners as for example the ETH Zurich. The campaign is scheduled for April 2016.

Mixed-phase cloud campaign
In order to continue the data collection in real ice clouds, INUIT will conduct a second field experiment at the High Alpine Research Station Jungfraujoch. The results obtained in the first phase of INUIT show that the variability of IPR composition is very high from event to event (Schmidt et al., 2014; see above), and comparison to previous CLACE experiments (Kamphus et al., 2010) shows that also the year-to-year variability is high. We will therefore conduct a mixed-phase cloud experiment at Jungfraujoch in the frame of INUIT, in cooperation with a CLACE experiment led by the Paul Scherrer Institute, Switzerland (PSI). The PSI is planning a large experiment in winter 2017, and has already agreed to support the participation of the INUIT groups. Currently the campaign is scheduled for January/February 2017. 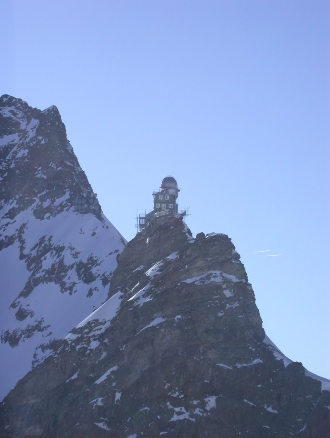